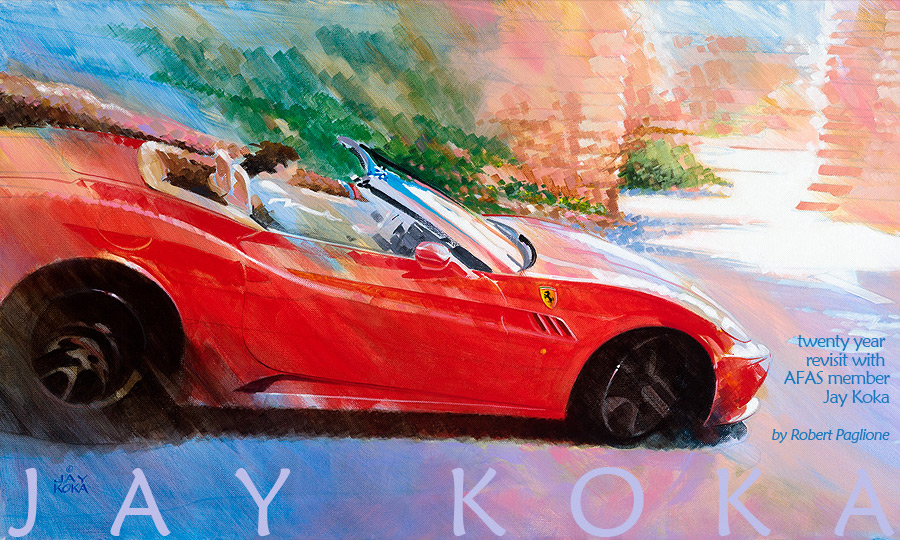 A chance meeting at the Barrett-Jackson auction in Arizona in 1988 has turned into a nearly quarter- century friendship with Jay Koka.
In the intervening years, our wives and families have become good friends and shared life's milestones.. marriage, birth, death... the markings of the passage of such a considerable period of time.

At that 1988 auction, after much serious consideration and discussions with Carol...and no less negotiation of price... I purchased my first Koka. "Breadvan" is an iconic photo-real gouache on board work that is still a part of my collection and I enjoy to this day. I say iconic because Koka has a wide range of painting styles and his first 5 years or so were occupied almost entirely by high realism and a focus on the car as an object without a surrounding context. Some twenty years later, DynamicArtwork.com called Koka "something of a Renaissance man" saying that

"...what Jay Koka does manage that not many do is slip effortlessly between styles - sometimes in the course of one painting. The resulting contrast is as impressive as it is surprising." This is an important point that cannot be overlooked in any discussion of Koka's work, particularly when viewed in the context of some two decades.

In 1992 I wrote an article on Koka's work for the magazine AFAS Quarterly. At that point, Koka had been a full-time professional artist for just 5 years but had already achieved significant success in the automotive art world, culminating in the sale at auction of his Meadow Brook Concours poster original for a then record $39,000.

Summarizing 5 years was easy. It was like peering through a telescope with a small field of view... easy to take it all in with one look. Twenty some years however is another matter, particularly when dealing not just with the art, but the complex personality of the artist. In his 1994 book on the tenth anniversary of the founding of the Koka studio, John Zolomij said Koka was "successful before he was successful", this in reference to Koka's successful corporate marketing career prior to the formation of the Studio. This again is another important point in discussing Koka's work because he is a man of a very broad range of interests and expertise and these are all brought to bear on his artistic career. He once told me that he likes to paint... but also likes to do many other things. He is also easily bored and is constantly moving between his many interests...

computers, cars, motorcycles, design... and this, perhaps more than any other explains his relentless experimenting in both color and style in his artwork. I once asked him why this was so and he told me that "I just can't keep painting the same painting over and over again. It simply bores me. I like to set challenges for myself in my work just to keep my own interest. I often go for very long periods of time without painting at all... I find that it refreshes me and almost always signals a change in my painting style."

Whatever the painting style doesn't seem to matter because Koka's work... realist and impressionist is equally sought and collected. His print library now has well over 100 titles on paper and some 30 titles of full-size canvas reproductions. My own art collection consists of some 75 works by a wide range of artists and a good part of that group is by Koka. Over the years, Carol and I would attend shows all over North America and at least once a year I would ask him which is your best work that year and I would buy it.

As a result, I believe that I have some of the best work he's done in the past 20 years. One of my personal favourites is "Louis' Garage". It was the first really significant art purchase Carol and I made and I believe it still sets a standard for Koka's high realism. Ferrari owners agree. Not only was the print edition sold out quickly but the Ferrari Club of Italy even used it for a Christmas card and it along with two others was invited for exhibition at the Centario Ferrari in Italy. 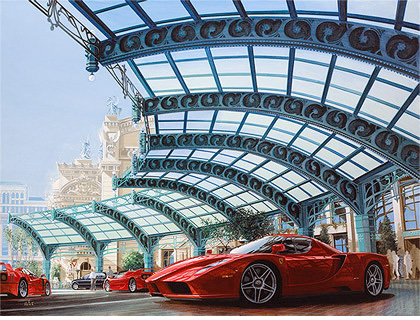 Ferrari simply makes up a very large part of his body of work. Seven times poster artist for the Cavallino Ferrari Classic and nine times for the Ferrari Club of America International Meets... more than any other single artist. Why? Koka captures the essence, the very feel of the car and the passion of the owner. Look at "Sunday Drive" (page 30) for simple exuberance at the wheel... look at "High Rollers" (previous page) for the juxtaposition of three all-out performance cars in the middle of a classic architectural setting. John Barnes of Cavallino wrote of Koka's work: "It is the uniqueness of each Ferrari that captivates us most often and we appreciate an artist who can capture particular and often hidden features - opening our eyes to it in his art."

Perhaps what I like and respect most about Koka's work is that he never does the same painting twice. There is an artistic integrity to each new work... even when of similar subject matter and concept. An excellent example of this are the two "Drift" paintings. "Drift No1" is a D-type Jaguar at high speed. It is impossible to focus on any part of the painting yet it is still very high realism executed in gouache on board. "Drift No2" (previous page) is a Porsche Carerra GT at speed. Same concept but the exact opposite in style... carefully considered smooth color devoid of significant detail in an acrylic on canvas. 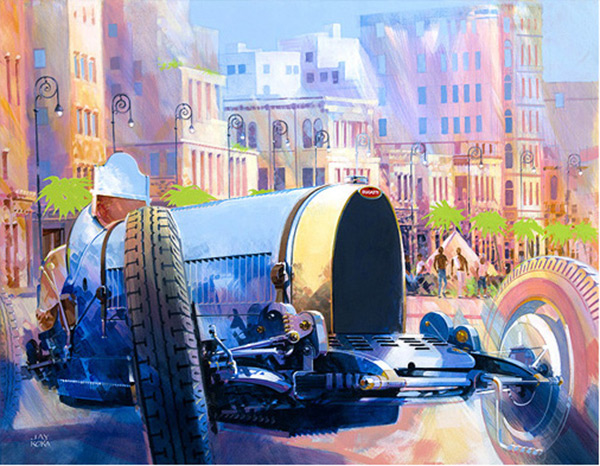 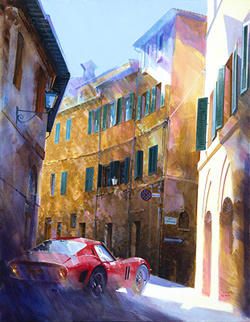 I mentioned earlier that he has a very broad range of interests. In 1986, he purchased his first computer and at a time when many people didn't recognize the word "internet", he had already purchased his first domain: nitebridge.com which later turned into webvues.com. Born out of an initial interest in the internet and an early realization of the impact that it would have on his art business, the company that created the first jaykokastudio.com website blossomed into a full-service web developer, creating and managing web presence for corporate clients. In fact, the online publication you are now reading is owned and managed by Knightbridge.

Earlier this year, Koka told me that he was ready for another change. He said that on the twenty-fifth anniversary of the launch of his studio, he wanted to do two things: first, change and broaden his color palette and second, embrace and expand upon his more "impressionist" painting style... a style he confesses he prefers to realism. In the 2011 painting "On The Corniche" (previous page), this objective is fully realized... as with "Non'Entrare" (previous page) and "Sunday Drive" (title page) all premiering at the AFAS show at Pebble Beach. He also confided that he was somewhat concerned about how it will go because his experience with his own work is that more "realist" work tends to sell better. But this is the measure of the artist... he paints to satisfy himself... and hopes his audience will enjoy and understand what he's done.

Perhaps in 2041 we'll catch up and see how things went.