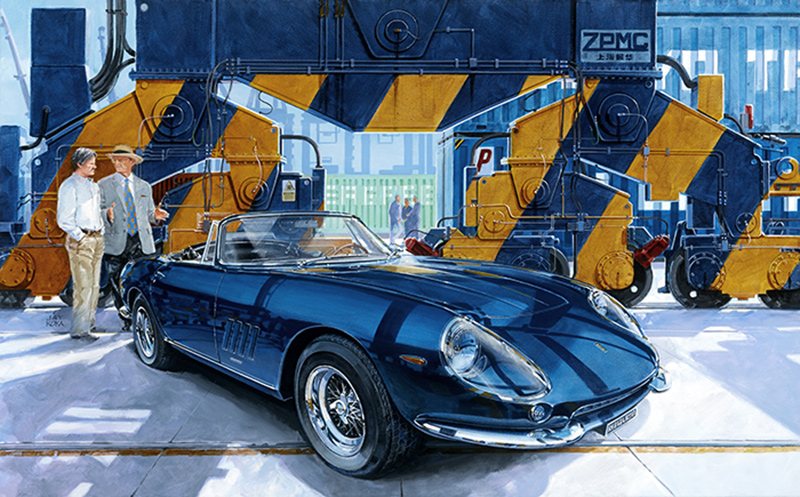 Jay Koka: “Cathy and I went on a long ocean trip to South America in the spring of 2014. Five countries, 4,800 miles and one week on the ground in Peru took us to a fabulous range of cultures and both mundane and exotic locations (yes, we went to Macchu Picchu). We visited a large number of seaports and I very quickly became enamored with the gigantic container cranes. Gigantic does not do them justice... you actually have to stand underneath one of these incredible machines to fully appreciate their scale.

Calao is the seaport for Lima, Peru. Since we had already spent a full week in Peru, we decided to stay on the ship while it was in port in Calao. As such, I had the opportunity to walk around and, much to the concern and displeasure of the port security people, very thoroughly inspect and photograph every detail of the cranes. I can only imagine what it looked like when I took my huge number of reference photos at every angle imagineable.

The cranes at Calao are manufactured by “ZPMC” Shanghai Zhenhua Heavy Industries, the largest manufacturer of port equipment in the world. The Calao cranes are actually all blue. This concerned me because

I was already thinking about my painting and was distressed that the machinery, which is very complex and interesting, would end up looking like a “wall of blue”. The answer, the solution, came a week later in the port of Cartagena, Columbia where I saw a few cranes at some distance with these diagonal stripes, no doubt in place to warn traffic of the machines.

The 1967 Ferrari 275GTB/4 Scaglietti NART Spyder I photographed in 2013 at the Pebble Beach Concours was selected because, aside from being a drop dead beautiful car, it is more or less the same color as the crane. While I did not want the crane to be a “wall of blue”, I also did not want to place a color in front of the crane that would become too much the focus of the painting.

I am immensely pleased with the outcome of this techincally challenging painting. Although that Ferrari probably never came anywhere near that port, somehow the car and the crane live well together.”

This major new work premiered at the AFAS Exhibition at the 2014 Pebble Beach Concours and won an "ATHENA AWARD OF EXCELLENCE 2014". 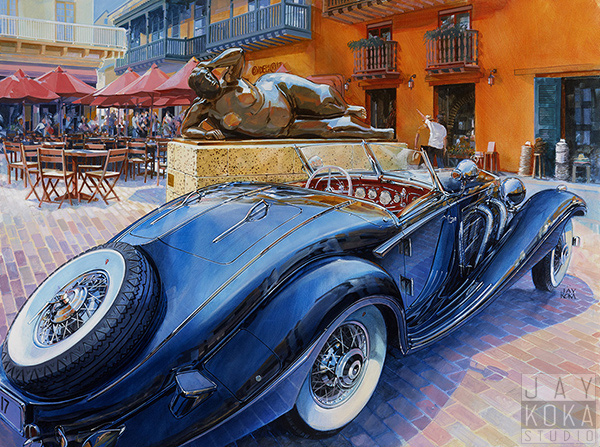 “Cathy and I went on a long ocean trip to South America in the spring of 2014. Five countries, 4,800 miles and one week on the ground in Peru took us to a fabulous range of cultures and both mundane and exotic.

The range of cities in South America is astonishing. From the modernity of Santiago Chile and of 10-million-person Lima Peru to tiny, historic Urubamba, the bounce from today to hundreds of years in the past can be disarming. But one thing is evident from country to country: a great care and respect for the past that we in North America seem to have lost. The quality of care and restoration of “old” or “center” parts of cities varies but I would place the walled city in Cartagena, Columbia at the top of the list.

Although still a work in progress, many spots in the old city are simply, irresistably beautiful. Plaza Santo Domingo is one of these special spaces and no less for featuring Fernando Botero’s definitive work “Gertrude”. Unfortunately we approached her through a sidestreet from the rear so we didn’t really get that “oh wow” moment until rounding the statute. It is perhaps one of Botero’s best know works exploring figures in both two and three dimensions with large, exagerated volumes.

I knew there was a painting in this setting almost immediately. But selecting the right vehicle would be crucial to the success of the work. I wanted something that would compliment Gertrude’s voluptous curves but not something so outrageous that it would battle the work of art for attention. I wanted the painting to be about two works of art, each a masterpiece in its own right.

I had admired a 1936 Mercedes-Benz 540K Special Roadster at the 2013 Pebble Beach Tour as well as on the Concours field itself. Not a wasted line, not an unecessary line anywhere… the Roadster has all the beauty and design integrity that made the 30’s such a Golden Age for automotive design. The fact that it is black just made my decision that much easier.”

This major new work premiered at the AFAS Exhibition at the 2014 Pebble Beach Concours. 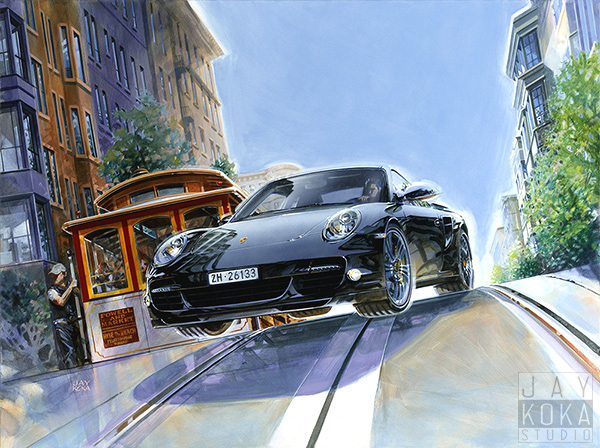 ”Like being frozen in the middle of holding your breath...” Inspired by the 2007 painting Streets of San Francisco, this new large painting was commissioned by a collector living in Switzerland. Like the 2007 work, it features a car launching off the crest of a hill... a Ferrari F430 F1 from the rear in 2007 and a Porsche Turbo... now from the front.


Koka: ”I never like to do the same painting twice and while the concept is similar, the two paintings are completely different both in content and execution.” 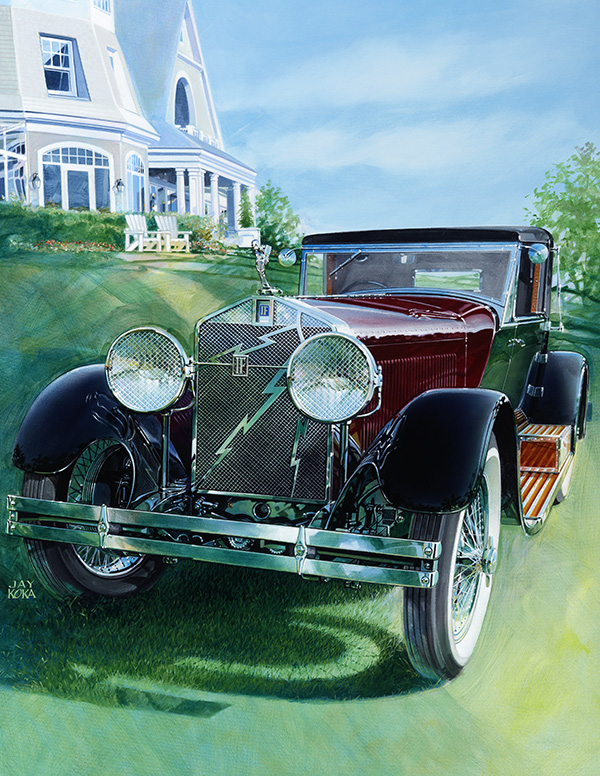 Peter Boyle's Best of Show winning 1928 Isotta Fraschini 8A SS is featured in this, the official art for the 2014 Cobble Beach Concours d'Elegance. This is the second year for the show that takes place at Cobble Beach, near Owen Sound, Ontario in September and Koka's second original poster painting for the event. 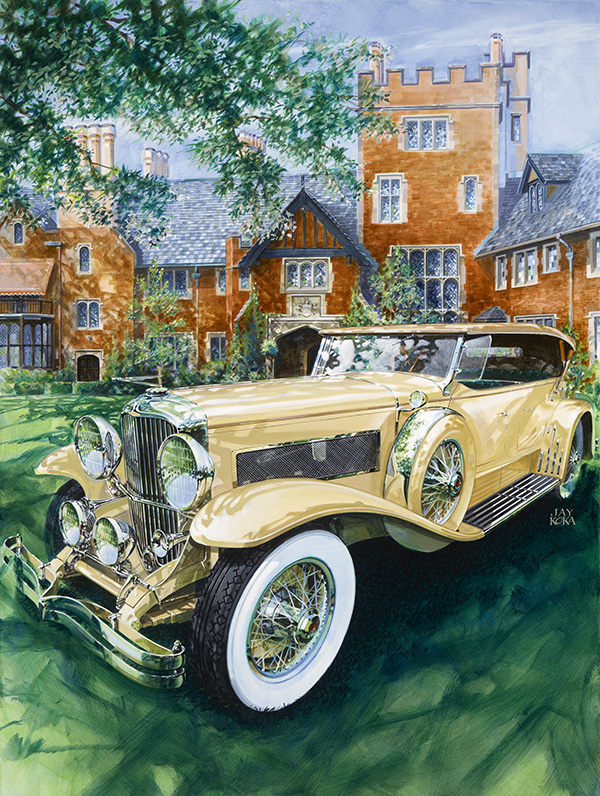 Judge Joseph Cassini's 1929 Duesenberg SJ Derham Tourister is featured in this, the official art for the innaugural 2014 Stan Hywet Concours d'Elegance. This new concours takes place at the Stan Hywet Hall and Gardens in Akron, Ohio. Built almost one hundred years ago, the 65-room manor was once the Sieberling Estate. Seiberling was co-founder of the Goodyear Tire and Rubber Company.