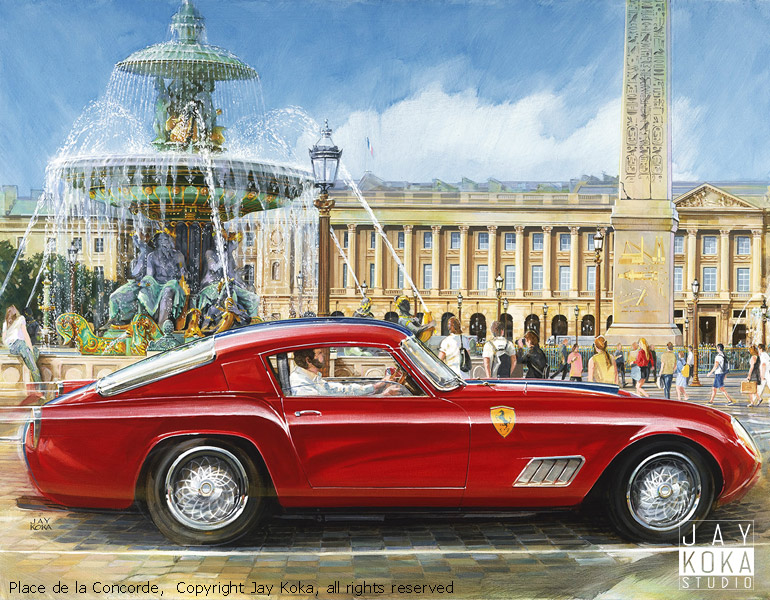 A return to Paris to exhibit in the 2019 RetroMobile show presented the opportunity and inspiration for this newest work. Like “Pres de Champ de Mars” and “Bourdonnais et Rapp” this latest work resulted from a trip into the heart of the city immediately following the close of the show. So this painting is my commemoration of a swift and memorable drive around this most famous traffic circle.

Contemplating a vehicle for the painting, the “Tour de France” immediately came to mind and the Patterson Collection’s pristine 1959 Ferrari 250 GT Tour de France fit perfectly and also somewhat appropriately for the background. It’s certainly in the right neighborhood. The 44x34" (110x85cm) acrylic on canvas is a major new work scheduled to premier at the 2019 St Johns Concours and then on to RetroMobile in Paris in February 2020. A full size canvas reproduction edition is now available... 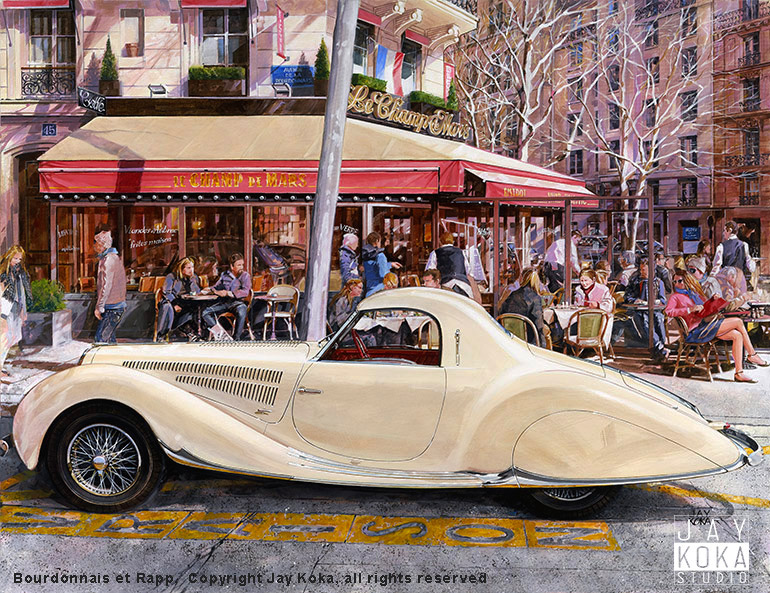 First the 2018 painting "Pres de Champ de Mars" ("Near the Champ de Mars") featured a wonderful cul de sac that ends at the foot of the Eiffel Tower. And now, just a few blocks up the Avenue de la Bourdonnais is the latest work "Bourdonnais et Rapp" featuring a typical Paris cafe/bistro located on Avenue de la Bourdonnais at the intersection with Avenue Rapp. Don't bother looking for yourself if you happened to be at the cafe that February 12th morning: all of the patrons are "made up" (except for the waiters) and tables have been moved around to suit the painting.

The magnificent 1938 Delahaye 135MS Teardrop Coupe is parked in the "LIVRAISON" zone, and, like the patrons has probably never been there... but... it is at home where it belongs: in front of a cafe in Paris, France. The elegant and sensuous Figoni and Falaschi body mirrors the architecture of the cafe and the neighborhood. It just looks right. The 44x34" (110x85cm) acrylic on canvas is a major new work premiering at the 2019 Retromobile Show in Paris. A full size canvas reproduction edition is now available... 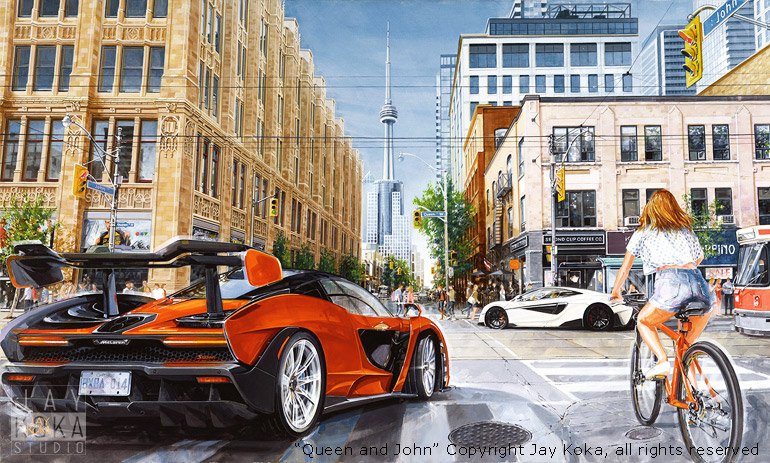 For many years the tallest free-standing structure in the world, the iconic CN Tower forms the focal point in this view of downtown Toronto. Opened in 1976, the 1815 ft high tower is still the highest structure in the western hemisphere and is visible for many miles as you approach the city.

The Senna, on John Street, approaches the busy intersection with Queen Street in the heart of downtown. On the left corner, the Bell Media building. This neo-gothic building was built in 1913 and originally served as the headquarters of the Methodist Church of Canada. It went on to be known as the home of Chum/City TV and "MuchMusic". Its major function continues to be a broadcast center. On the right corner, a Second Cup Coffee Co. store, another Toronto fixture.

Featured in the work: the hot new McLaren Senna and a McLaren 600LT.

Koka: "Although I live near Toronto, neither car is mine and the girl isn't my wife... but the bicycle is mine. I should also point out that while the reproduction shows the work as originally painted, the original was subsequently altered to represent the painting owner's cars. The Senna was altered for color detail as well as the owners license plate. The 600LT was recolored to grey."

The 60x36" (150x90cm) acrylic on canvas is a major new work. The original painting is in a private collection. 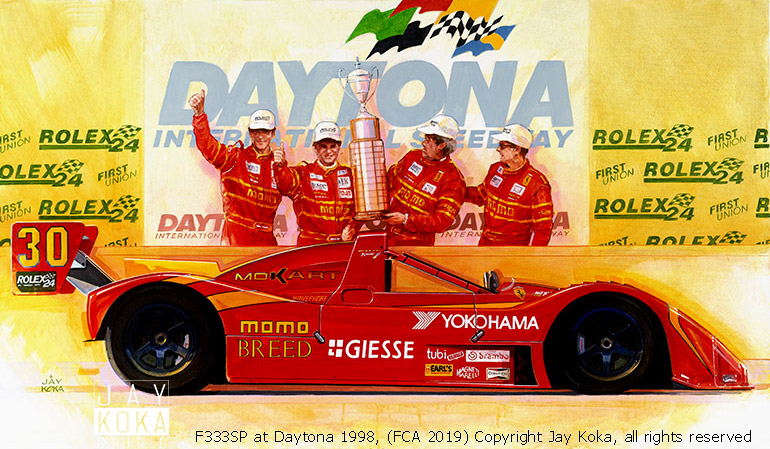 The F333 SP of Momo Doran Racing won the 24 Hours of Daytona driven by Mauro Baldi, Arie Luyendyk, Didier Theys, and Giampiero Moretti. They qualified second and went one better in the race after sneaking by another F333 SP of Scandia Motorsports to secure the win. It was the first time Ferrari had claimed a win in the 24 Hours of Daytona since their famous one/two/three finish in 1967. Six weeks after Daytona the same Momo Doran Racing F333 SP went on to win the 12 Hours of Sebring.

Although the car is accurately rendered, there have been a number of artistic liberties taken with the rest of the image just to make it all work together. It does however capture the spirit of that winning moment on the podium. Thanks to photographer John Brooks for reference material. 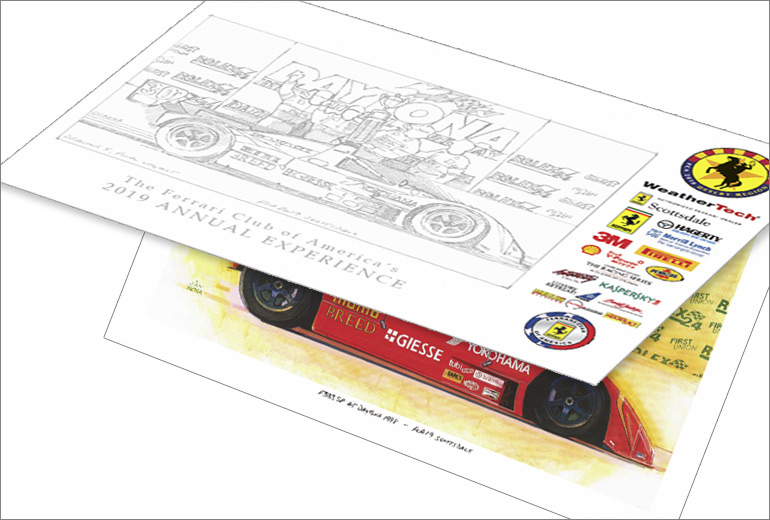 The art has been released as a full size canvas print in an edition of 10 signed and numbered... 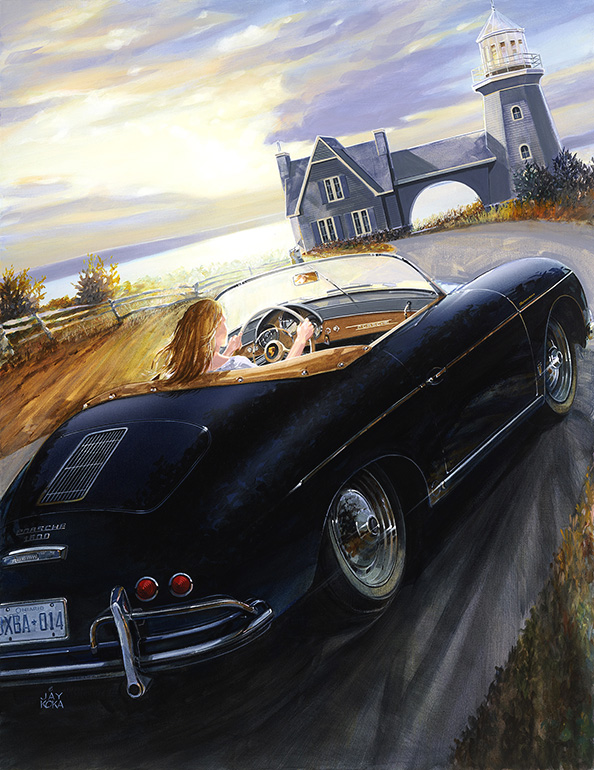 Classic Porsche 356 on its way to "load-in" on concours morning. Approaching the Cobble Beach lighthouse. This is Jay Koka's seventh original work presented as the poster art for this event. 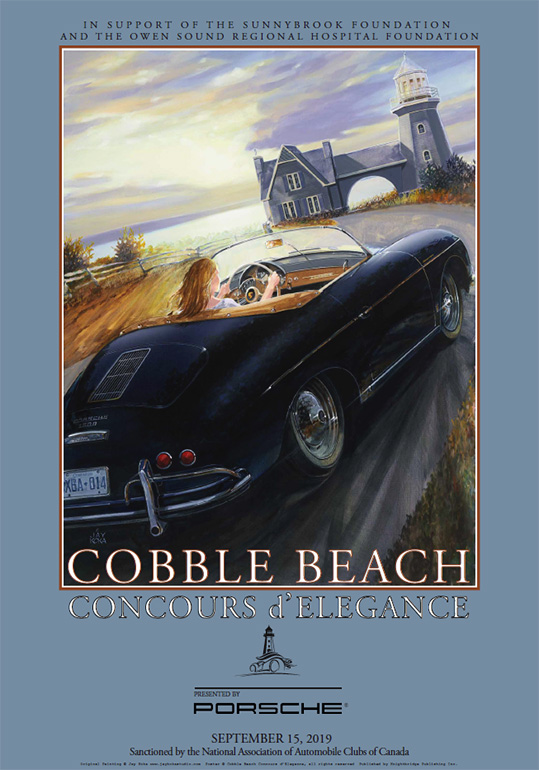 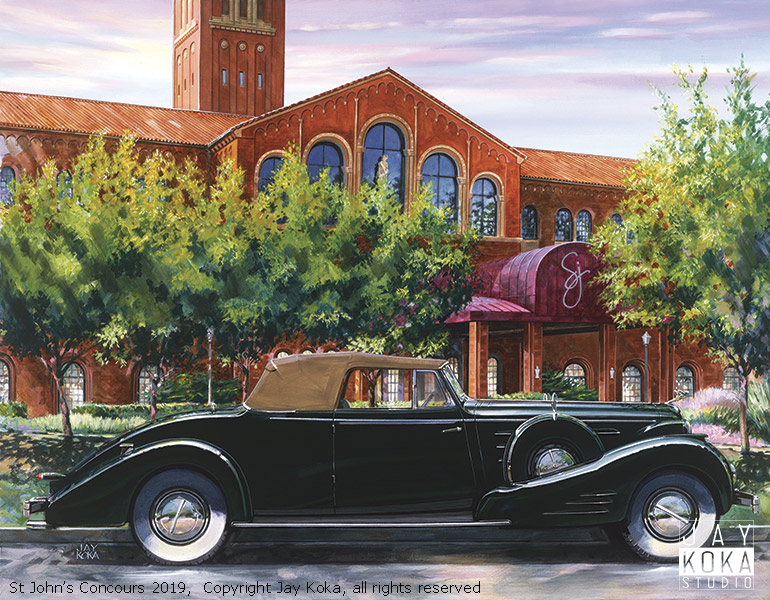 John D Groendyke was named the 2019 Collector of the Year for the Concours d'Elegance of America at St Johns and his 1936 Cadillac V16 Convertible was selected as the poster car. The car is presented in front of the main concours building entrance. This is Jay Koka's fourth original work presented as the poster art for this event. 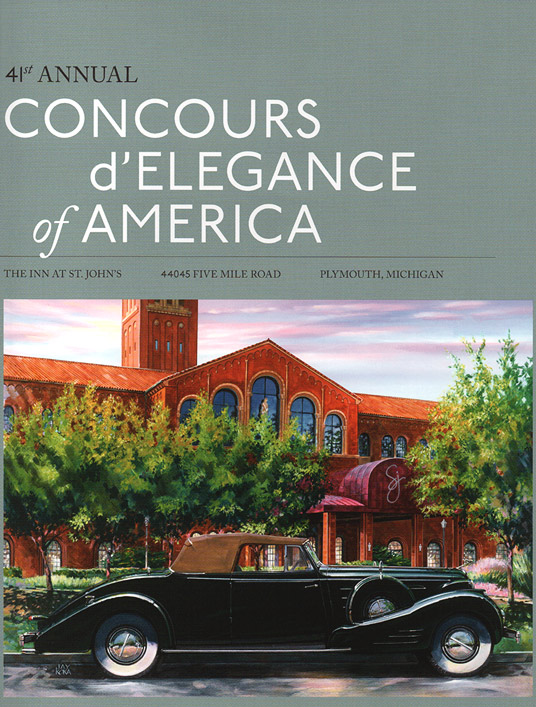 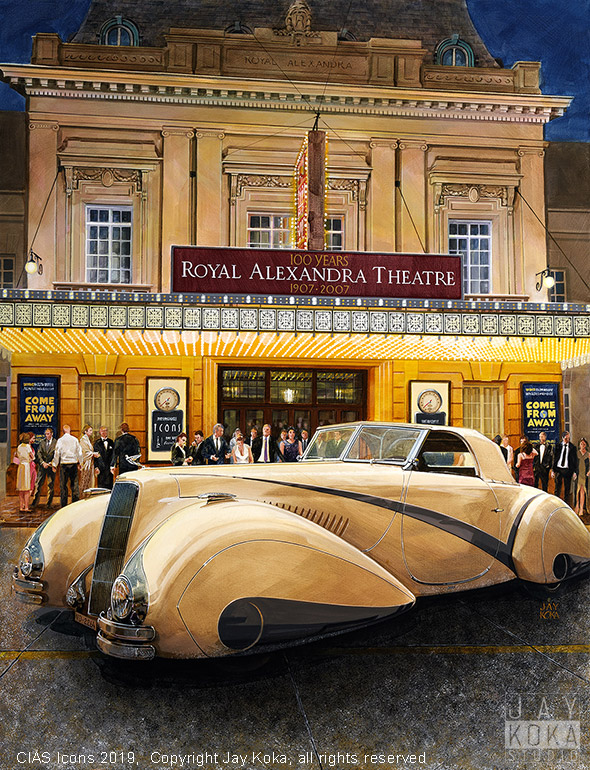 The Canadian International AutoShow with the Cobble Beach Concours d'Elegance has launched a feature of the 2019 AutoShow called "ICONS - Art and the Automobile" in which unique vehicles are presented as works of art.

The 2019 inaugural event art features the 1937 Cadillac Series 90 Hartmann Cabriolet from the Patterson Collection. The background is the iconic Royal Alexandra Theatre in downtown Toronto. 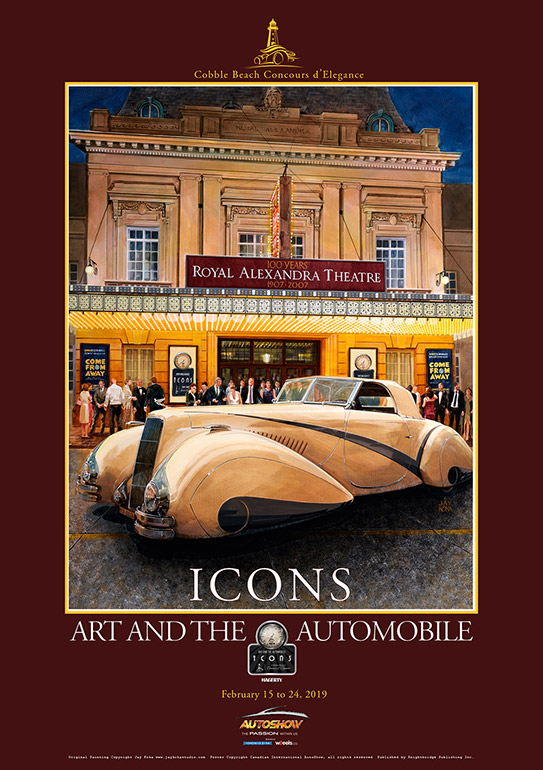 The art has been published as a fine quality poster available from the AutoShow at the event February 15 thru 24th at the Metro Toronto Convention Centre www.autoshow.ca contact the show for further information.

The poster is not available from the Studio.