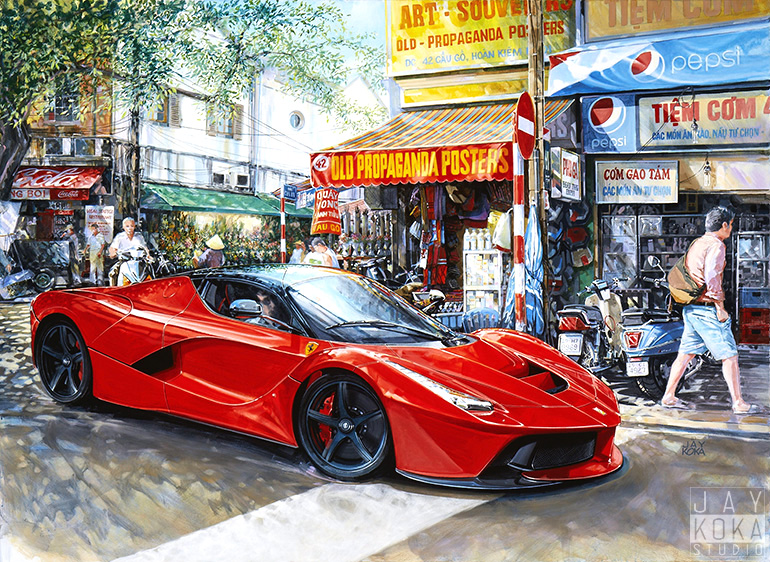 No armchair traveller, AFAS member Jay Koka has actually been to the worldwide locations featured in his paintings. Recently, he portrayed a Mercedes-Benz 540K in ‘Directions In Cartagena’ with Fernando Botero’s statue ‘Gertrude’ in Cartagena, Columbia, followed up by the Athena Award winning ‘Calao’ featuring a Ferrari 275GTB/4 NART Spyder in the Lima port town of Calao, Peru.

“ ‘Old Propaganda Posters’ is an amalgam of Saigon and Hanoi recently visited by Cathy, my wife, and me.” says Jay Koka, “We were walking in the old Chinese quarter when I rounded a corner and saw the sign: ‘Old Propaganda Posters’. It literally stopped me dead in my tracks… I knew there was a painting here but how do I construct it? The idea was formed and crystalized a few minutes later when a Gallardo rounded a nearby corner.”

“I love paintings that present great contrasts and perhaps even clashing forgrounds and backgrounds. The old quarter with its cluttered art shops, flower sellers and


purveyors of just about everything has a feeling of age, perhaps even pleasantly decayed. Contrast this with the the very newest and the very latest… which the Ferrari LaFerrari most certainly is.”

“It took a very large painting, 60 inches wide by 44 inches to be able to capture the level of detail that I felt the painting needed to communicate this foreground-background contrast.” continues Koka, “I am really pleased by the detail depth and wide range of colors in the background... and the LaFerrari is no slouch either. I was looking for a very delicate balance of the car in motion but just barely… I wanted to show every aspect of this awesome car.” 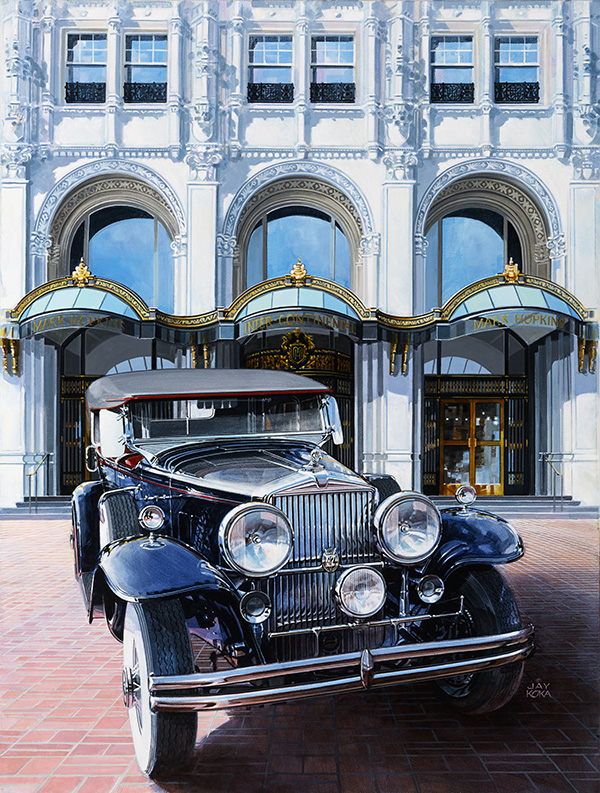 “We had gone on a lengthy trip to southeast Asia in the early spring of 2015. Although the new painting “Old Propaganda Posters” was an unexpected result of this trip, I was on a definite hunt for a unique location.” Says Jay Koka. “I specifically went to the Penninsula Hotel in Hong Kong and the Raffles Hotel in Singapore because I thought that one of these world renowned hotels would serve as a fitting setting for the stately Stutz.”

“While both turned out to meet my high expectations architecturally, the problem was that the painting would require a very long view of either of the two hotels because their immediate entry areas, while very attrective, were just not elaborate enough for what I had in mind. Of course the other drawback in a “long shot” was that the car would end up being quite small within the frame of the painting.”

“Disappointed, I spent some time pondering the problem and recalled that a number of years earlier I had been at the Mark Hopkins in San Francisco. I remembered the spectacular entry way and hunted through my photo archive for reference shots that I knew I had taken.


Not only did my memory of the entry area prove to be right, a little digging and I also discovered that the hotel and 1931 Stutz were virtually the same vintage… here’s what the hotel says: ‘When The Mark Hopkins Hotel opened onDecember 4, 1926, San Franciscans proclaimed it architecturally perfect, flawless in its erection, comprehensive in its accommodations...strikingly representative of the best there is in modern hostelry.’ The LeBaron bodied Stutz could make virtually the exact claim as being representative of the very best there is in automotive design of the time.” Concludes Koka, “Perfect match. As it turned out, I didn’t have to go all that far after all.”

No armchair traveller, AFAS member Jay Koka has actually been to the worldwide locations featured in his paintings. Recently, he portrayed a Mercedes-Benz 540K in “Directions In Cartagena” with Fernando Botero’s statue “Gertrude” in Cartagena, Columbia, followed up by the Athena Award winning “Calao” featuring a Ferrari 275GTB/4 NART Spyder in the Lima port town of Calao, Peru. 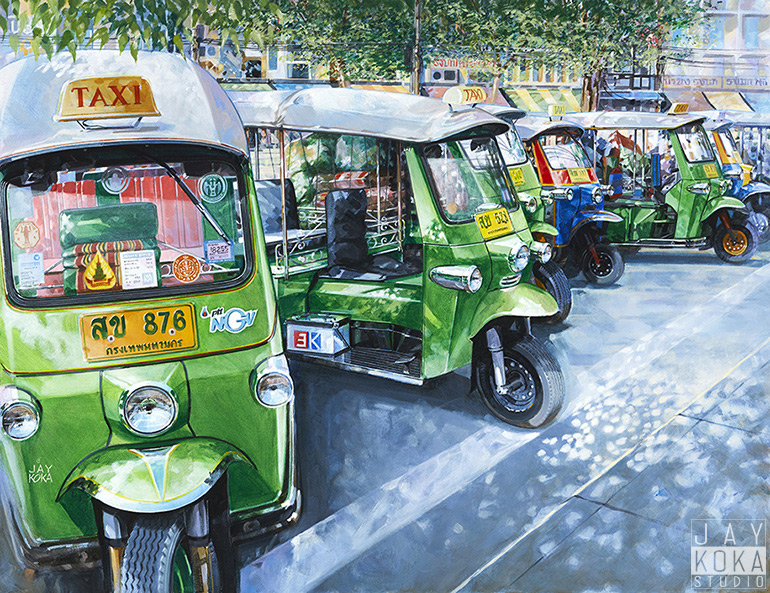 No armchair traveller, AFAS member Jay Koka has actually been to the worldwide locations featured in his paintings. Recently, he portrayed a Mercedes-Benz 540K in ‘Directions In Cartagena’ with Fernando Botero’s statue ‘Gertrude’ in Cartagena, Columbia, followed up by the Athena Award winning ‘Calao’ featuring a Ferrari 275GTB/4 NART Spyder in the Lima port town of Calao, Peru. And most recently, "Old Propagana Posters" in an amalgam of Saigon-Hanoi.

“Like everyone else, I thought that Tuks are all the same... as cool as they are, they are really nothing more than overgrown 3-wheel motorcycles. Bangkok is home


to an astonishing number of them, more than anywhere else I've been and it's when you see them in a group, standing still, that you start to have an appreciation for how different they truly are from one another.” 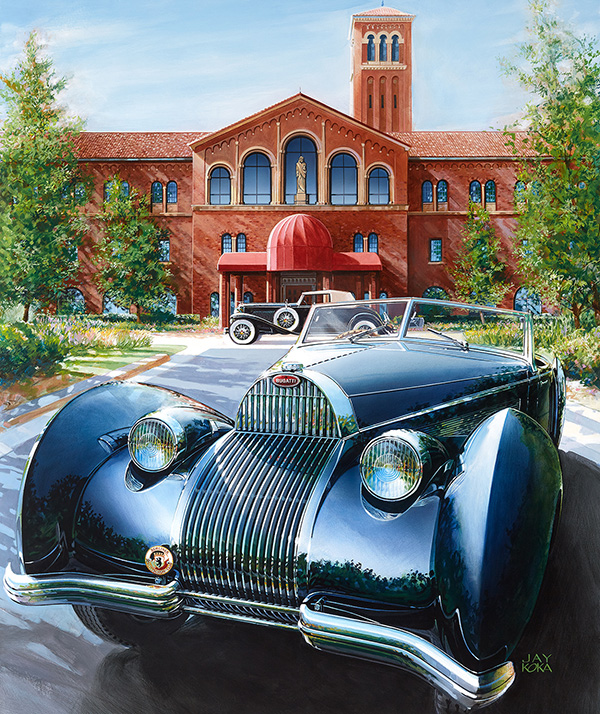 Koka returns as featured and poster artist for the Concours at St John's. Koka created the poster painting for the St John's innaugural event in 2011 when it replaced the long-running conours at Meadow Brook Hall (where he was also featured artist in 1992). This time featuring the winners of the 2014 event... Best of Show European is the incomparable 1939 Bugatti T57C Cabriolette by Vole&Rutherbeck (Patterson Collection). In the background, Best of Show American, 1932 Duesenberg J Convertible Victoria by Murphy (Parfet). 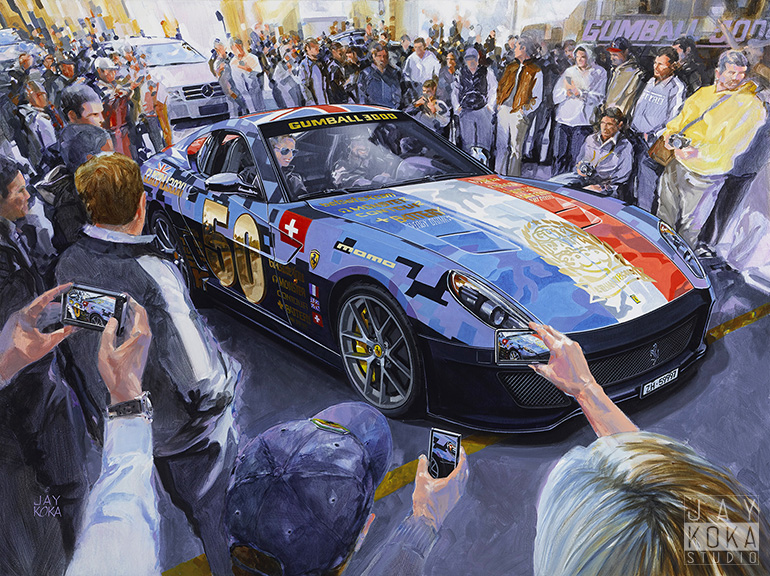 The small 16x12" painting "Photo Op" was a dress rehearsal for the highly complex "Photo Op No2". Commissioned by a Swiss collector, "Photo Op No2" features the owner's Ferrari 599GTO at the start line of the Gumball 3000 Super Car Rally set in Copenhagen. Complex - no doubt from the apparent "cast of thousands" - the real challenge according to Koka is that the car was wrapped with a "matte" finish. Koka: "In many ways, a "shiny" car is easier to paint... depicting a "matte " finish car presents the danger of it looking almost like a mockup of the car. Or, even worse, your inability as an artist to competently render a car."

The painting was begun in June 2014. Because of its complexity it was worked on of-and-on for the following seven months.

Reminiscent of the 2013 Tour Group of 12 small originals, this group of Ferrari studies is like a set of small jewels...each an exquisite study in shape, color and texture. Initially realist, the painting style breaks down to impressionist shapes and colors on closer contemplation with a sweeping bold painting style. 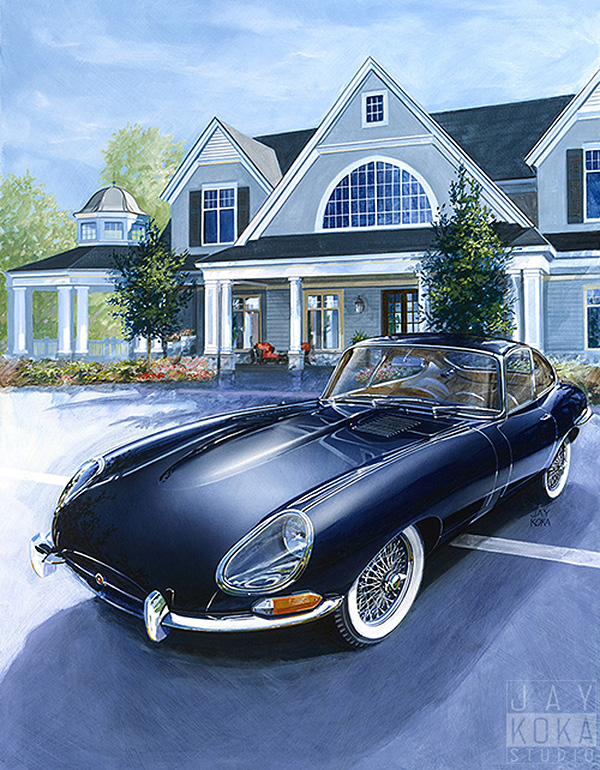 Two versions of the 2015 Cobble Beach Concours poster were designed (see below) The first incorporating this new 34x44" acylic on canvas original featuring a Series One Jaguar E-type in front of the Cobble Beach Club House. Last minute participation by Cadillac as presenting sponsor saw the poster redesigned to incorporate an very early... 1988... original gouache on board painting by Jay Koka titled "Cadillac". 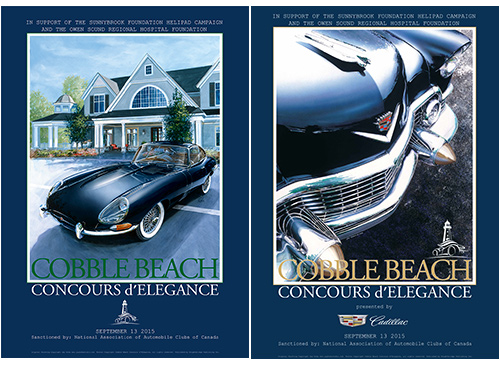 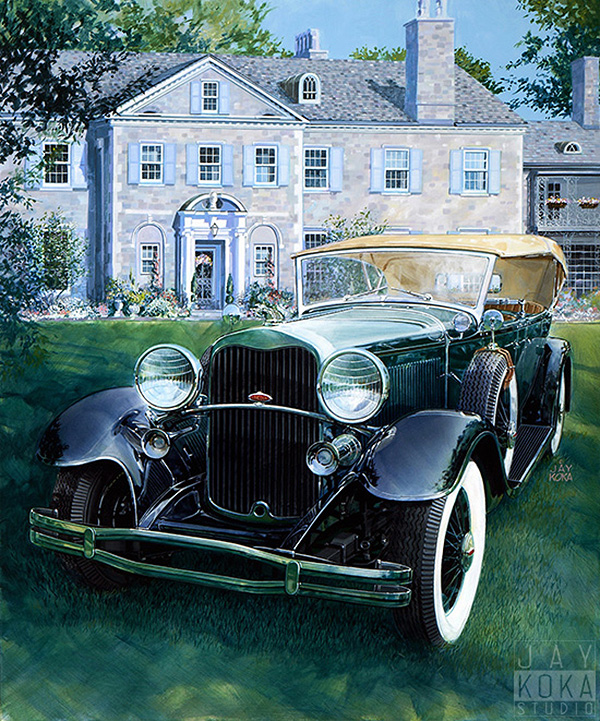 Privately commissioned painting of a 1931 Lincoln Model K Series 201 Dual Cowl Sport Phaeton, body by Murray. One of 17 remaining examples from an estimated original build of 77. Owned by Craig Selinsky.

The building in the background is a private residence located in the Hills and Dales Village in Canton Ohio. Completed in 1930 by the Koontz family, it has only had 3 owners to the present and is maintianed very much in its original style.